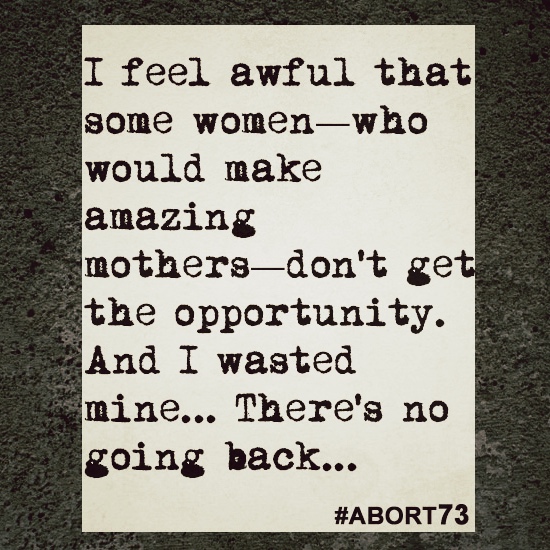 I feel awful that some women—who would make amazing mothers—don't get the opportunity. And I wasted mine...

In February 2014, I found out I was I was pregnant. I had met my partner—who was 13 years older than me—on a night out, I was 19 at the time we met and completely fell in love with him. We both had our differences; he has his career as a police officer whilst I was just starting mine in healthcare. He had never had children in any past relationships, and when my test came up positive, I kind of deep-down hoped that the man who had told me he loved me would want us to settle down and be a family. Instead, when I told him the news he made his feelings very clear, “I did want you, but not a baby.”

We spent hours over the next few days discussing what to do. I had got it in my mind that I was going to bring this baby up alone. He told me he didn't want anything to do with us, but if the child wanted anything to do with him once he or she was 18, that was fine. Looking back now, he was a very manipulative man. The man I loved told me he wanted me; we could have a family one day, but now wasn't the right time.  He talked me into an abortion, and so I went along. Part of me hoped when we got to the clinic that the realisation would hit him, and he would see sense. The first part of the appointment took a lot longer than intended due to the first doctor being unable to give an estimate of how far along I was due to my womb being tilted and him initially thinking it was an ectopic pregnancy.

We listened to the ins and outs of everything, and the nurse asked me if I'd like to take the first tablet. Asking several times if anybody was pressuring me to make this decision, I went ahead and took the pill.  When we got home I was shocked at the man I was in love with, I spent the night in pain and crying knowing what I was doing. He was great. Hot water bottles, candle lit bath, chocolates, and plenty of cuddles.  The next morning, we had to go back, only my partner was called into work. My dad took me to the second appointment. I remember feeling shameful—like I'd let my parents down. I insisted I finish it alone and went through with it. My dad just sat in the car outside. Coming out, I just wanted to curl up and hide—feeling so awful about what I'd done.  My dad dropped me back off at my partner’s place, and I thought I'd settle on the sofa with the duvet and a chick flick and fall to sleep. I didn't quite understand what my body was going to go through that day. I spent the afternoon in agony, feeling dirty and uncomfortable—dreading him coming home. When he finally arrived home, I'd actually crawled on the kitchen floor, making a drink in agony. He was brilliant, ignoring my telling him to leave me alone and insisting it was our mess, and he had to be there for me. I kept telling myself it would be alright.

It seemed to make us stronger for a while. The next month or so, I saw a side to this man I hadn't seen in the 9 months we'd been together.  He then realised as my best friend gave birth that I was beginning to resent him, and I was. I kept holding my god son, thinking of what we could have had—a beautiful little baby, our beautiful baby!

Now, I have to live every day with the feeling that I made the biggest mistake. Lying here each night wishing I'd never been so naive. I did what I did for the man I loved. But I made the biggest sacrifice I think I'll ever make. I'd have been due to give birth in the next 5 weeks, and I find myself thinking what I would be like now.

We lost our relationship after what we went through. We still have some contact but nothing major. I can't hate him as I loved him. I hate what we did, and I feel like I have nobody to talk to. I spend so much of my time crying about the baby I could have soon had in my arms. I just wish I'd of been stronger and realise now what I gave up earlier this year.  I know in years to come I shall always think about the child I could have had—the big brother or sister my children hopefully would have had. And I just don't understand. If it's right, should I feel like I need to grieve? After all, I had the abortion; I took those pills. I feel awful that some women—who would make amazing mothers—don't get the opportunity. And I wasted mine, I washed it away with a few pills and some water. There's no going back and I hate the way I have to live with this regret the rest of my life.