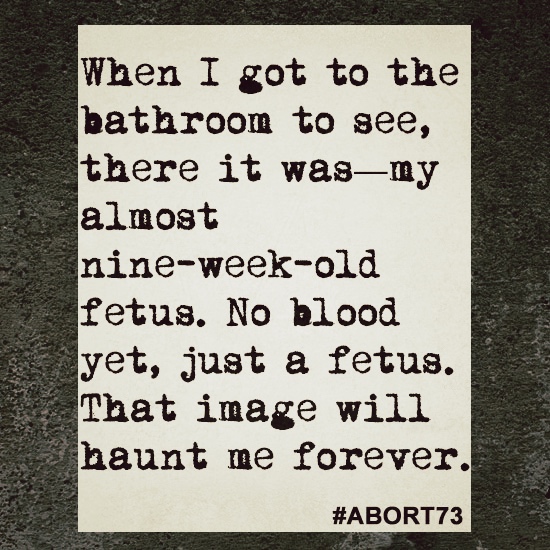 When I got to the bathroom to see, there it was... No blood yet, just a fetus. That image will haunt me forever...

I was five weeks when I found out I was pregnant. I knew from the time I found out that I didn't want to go through with the pregnancy. My actual boyfriend was out of town and I had started "seeing" someone while he was away, although the plan was never to have unprotected sex—never say never. It happened. Weeks later, I had breast tenderness and then a missed period. I instantly panicked. I called the guy whose baby I was pregnant with and told him. He was very wishy-washy about the situation. One minute he wanted me to keep it; the next minute he was unsure, and so was I. I stalled for three and a half more weeks before I decided to have the medical abortion done. My boyfriend moving back in town had a huge impact on the decision. The fact that he didn't know made me want to hurry and get it over with. I scheduled my appointment, paid my $100 deposit and waited a few days later for the actual procedure. That Wednesday I went into the clinic, got a vaginal sonogram, blood work and education on the medical abortion. I was scared and wanted to just leave, but saving my relationship at the time was more important. There were protesters outside begging me not to go in, and a big part of me wanted to listen to them. I was there two hours, left, got something to eat and came back. They called my name; I took the first pill. They gave me a bag with two more pills to take in eight hours and a few painkillers. Eight hours later, I did as I was told. I had severe cramping so I took the painkillers and fell asleep. I slept for maybe an hour and 45 minutes and when I awoke, I got out of bed to use the restroom. When I stood up, I felt a big glob fall out of me onto a pad I was wearing. When I got to the bathroom to see, there it was—my almost nine-week-old fetus. No blood yet, just a fetus. That image will haunt me forever. I freaked out. Afterwards, I bled a lot and had cramps, but nothing was worse than the pain I have to live with knowing I killed an innocent child. God makes no mistakes. Think before you act.