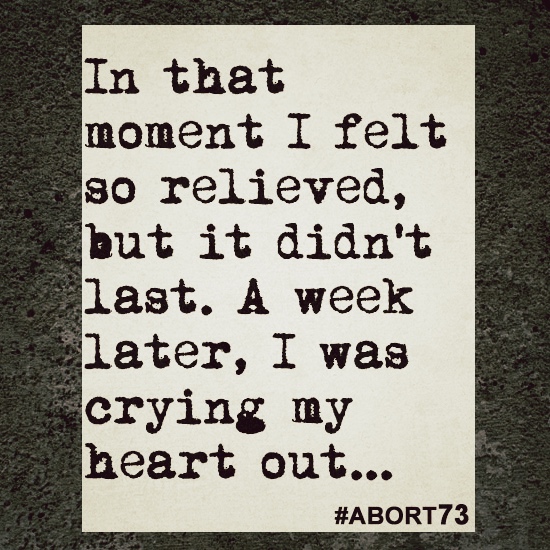 In that moment I felt so relieved, but it didn’t last. A week later, I was crying my heart out...

I am 18 now. This happened when I was 17. I got pregnant on almost the same day as my birthday—May 7th. My boyfriend was 18, and we had been dating for almost a year. When we found out about the baby, I was 5 weeks and 5 days pregnant. That day was almost surreal. I felt so weird—like it was a dream. We went to a free clinic where they performed an ultrasound and gave me the picture to take home. My boyfriend begged to see it, but I wouldn’t let him. I was so scared and upset. I think I was blaming him, so I threw the ultrasound in the garbage after I showed it to him for just a few seconds. Our baby was just a little bean. After hugging me, he asked me what I wanted to do. I told him we couldn’t have it. He looked at me and told me we would find a way while hugging me again. That same day, we were both at our homes texting. He told me he would do as I wanted and that we were going to stick together no matter the situation. So, I told him I wanted an abortion as fast as we could. A few days latter he bought some abortion pills. We didn’t think about it really; it was all so fast. He used to touch my belly, saying his baby was there and making jokes about it. He looked happy but worried. We had the pills, and when I was in the 7th week, I told him we had to do it now. He told me again that he was going to support me no matter what, so we did it. I took the pills and went through the worst physical pain in my life. In that moment I felt so relieved, but it didn’t last. A week latter, I was crying my heart out. So was my boyfriend. We used to lay in the sofa, cuddled, crying for our baby. He told me in tears that he should have stopped me. We cried for months; the pain was so hard. I still think about it even though it's been more than a year. My boyfriend told me he wanted a girl, and we regret our decision so much. We love each other, but we were so selfish and careless. Everything happened so fast. He still says our baby girl (because he is sure it was a girl) would have been the most beautiful girl. The baby would be 7 months old now. In that moment, we thought nobody would help us, but now we see we were wrong.  A few days ago, a doctor told us she would never recommend an abortion because it’s going against life—and she must know what she is talking about. We regret so much what we did. Think about what you are about to do. Don’t be selfish. Don’t be scared because no matter what, there is always some one who loves you and will support you.