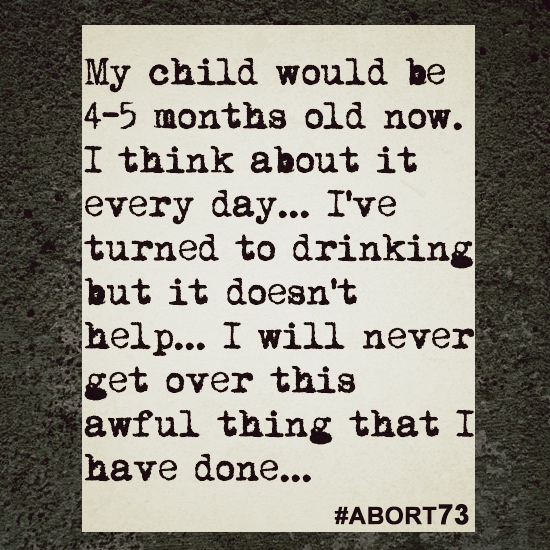 My child would be about 4-5 months old now. I think about it every day... I've turned to drinking but it doesn't help...

About a year ago this month, I found out I was pregnant by a guy who I barely knew and who already had a girlfriend. Me, pregnant?! You don't ever think it can happen to you until it does. My dad was a preacher and this guy had a girlfriend, so what was I going to do? The day I told him I just sent him a picture of the test, and he called me. I was crying hysterically and so scared. The first words out of his mouth were, "We will take care of ’it’” It?! I had been taught how wrong abortions were my whole life. I told him I didn’t think I could have an abortion or live with myself if I did. He went into this long spiel about how my dad would throw me out. He was leaving for the marines, and his girlfriend would find out. Of course she would! I was carrying his child, but to him it wasn't a child—only a little bubble.

After a lot of talking, he finally had me convinced that abortion was the best thing to do because I didn’t really want to raise a child alone. I went for my first appointment a couple of days later, and the chill of that waiting room in Planned Parenthood is something I could never forget. My best friend went with me, and I tried to keep calm for her, but I secretly was screaming inside knowing this was wrong. I sat there and watched tons of women come in and out. My turn came and I went to the back. They did a vaginal sonogram and told me I was about five weeks. They asked if I wanted to see my sonogram pictures. My heart stopped, and I just said no quickly because I knew if I saw it I could never live with myself. They had me schedule my next appointment for the abortion pill a few days later, and I left the clinic. The father texted me and told me to call him when I got out. I thought he cared so much about how I felt, but really he wanted to make sure I hadn't changed my mind. I told him I felt better because they were so nice, but really nothing made me feel better about this. I didn't want to tell my best friend that I secretly would rather just jump off the next bridge there in Birmingham than do this. I read tons of statistics and thought maybe, just maybe, I'd be one of the women who was okay after this terrible act.

We got home, and I just sat in my room or at work for the next couple days thinking that maybe I could run away. Or maybe he'd change his mind, but I knew he wouldn't. The day came for me to go, and he said he couldn't miss work, so I had to go by myself. I had stayed with a friend who lived closer so that I didn't have to act suspiciously with my parents. I woke up, went to the bathroom, and sat there and cried in the mirror until it was time to go. The hour drive there was the most terrible drive of my life, but I called to check in with my friend and also the father—and of course acted like I was fine. I pulled up sat in the parking lot and stared at the building until I suddenly got a phone call. It was my mom. She asked what was going on. I tried to play dumb, but I knew she knew something was up. I finally told her through the tears that I was pregnant and then proceeded to tell her who the father was. She cried and begged me not to go into that clinic, but I told her, "Mom, you know dad will kick me out.” She told me he wouldn't but neither of us really knew what he would do. She called the guy, and he told her that he couldn't be there for me so he paid for it because he thought it was the best choice. My phone would ring back and forth between him and her, and I had to go to the bathroom to talk to them both. As my mom was saying, “Come home,” the father was saying, "I won't be able to be there for you, just do it!” I came back out into the waiting room and sat there thinking of walking out, but his texts convinced me to stay.

My mom kept saying, “Please come home,” and I finally just laid my phone down and sat there with my eyes closed until they called my name. I walked back into the room where they did the sonogram, and they gave me another sonogram to make sure "it" was still there. At first they couldn't find him or her, but after three Planned Parenthood workers, they finally found it. They sent me into this room with about 20 women that I still wonder about today, and we watched videos about how calm and easy this would be. One by one they called our names to take the first abortion pill and speak with our counselor. I asked her about the mental effects, and she told me she had an abortion in 1992 and was completely fine. 1992?! That means that her son or daughter would have been my age. Why I didn't walk out of that office before taking that pill I will haunt me every single day of my life. The doctor came in, handed me my pill and told me I was free to go. I walked out of the building knowing I had just done something I could never take back. I got in my car and called the father to tell him I had taken the first pill and would have to take the second 48-72 hours later. He told me he'd be there for me through that.

When I saw my mom for the first time at home, I couldn't hold it together. I begged and finally convinced her not to tell my dad—which took a 7-month toll on her and their marriage. The next two days rolled by, and I texted the father to let him know I was having to do the second part. He said, "I'm sorry but I can't come, there's just something I can't get out of." I later found out it was a hunting trip. My mom got my heating pad ready, and I put the two pills on each side of my mouth and laid there. After about 45 minutes I was sitting on the toilet with headphones on so I didn't have to hear anything. I felt something drop and stood up. There it was, the he or she in my toilet covered in blood. Although it was only a sac, it still made me burst into tears. My mom tried to comfort me, but nothing would help how I felt. I texted the father to tell him it was done but that I was still hurting bad. He just said, "I'm sorry". For the next week and a half, I barely heard from him even though up until then it was constant texts and snap chats. My mom told me to let him know that he would be taking me to my two week check up. He seemed okay with it. The day before he called and asked me if I wanted a hotel room so we could spend some time together. Of course I said yes, hoping he was starting to care a little more. After my appointment, we checked in at the hotel. He took me out to eat and to the mall and pretended like he really cared. After that night when I went home, he become distant again. I finally decided I could never heal until I let him go.

This past year has been the most hellish I've ever been through. I turned to drinking, smoking and other things. My dad now knows everything and it hurts him so bad because he's my dad. He told me he would have never thrown me out, and he would have loved that grandchild. I promise you it isn't worth it. Not for a guy or what anyone will think of you. I will have to live every year knowing what I did in August of 2013. My child would be about 4-5 months old now. I think about it every day, and sometimes I have nightmares. I've turned to drinking but it doesn't help—except for one night. The father put me through hell and went on with his life as if nothing ever happened. His new girlfriend knows what happened because I told her, but he's convinced her and his family that I'm crazy—which I am now, because I will never get over this awful thing that I have done. Please, if you're scared or if you need someone, you can talk to me or someone else because it just isn't worth the after effects or hurt that you will have to live with.