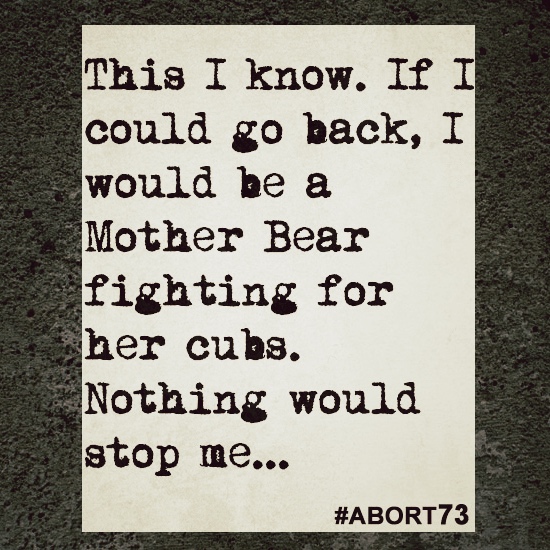 This I know. If I could go back, I would be a Mother Bear fighting for her cubs. Nothing would stop me...

I had two abortions when I was young. The first child I aborted was fathered by my first husband. He did not want another baby; we already had one child. I wish I had told him to go straight to hell—that I was going to have this child. But, I let him "demand" I have the procedure. He threw the abortion money at me while he was packing his camping gear and said, “When I get back, you better not be pregnant.” A few years later I was going through my divorce and dating a wild party guy. He also did not want my child. He also talked me into terminating.

My regret is not fighting for these two precious lives. I think it is made way too easy to get an abortion. It is legal fetal genocide, and people should see it for what it really is. Abortion is evil, and evil walks this earth.

When people ask me how many children I have I want to say four. But I can only say I have two.

This I know. If I could go back, I would be a Mother Bear fighting for her cubs. Nothing would stop me.  I know I will see my children on the other side. It will be joyous. I have to forgive myself each and every day—like taking a medication. The joy is knowing I will see them one day. In God's time…

God bless all of us who regret what we did in dealing with the guilt we feel, and the "what ifs.” We were not in our "right minds.” We did not truly think it through and most of all, in my opinion, we let others take control of our destinies. Because us women want to please—which is a whole other discussion.