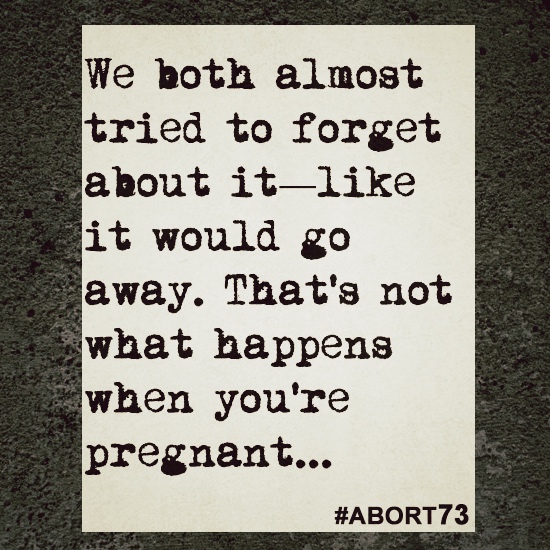 We both almost tried to forget about it—like it would go away. That's not what happens when you're pregnant...

I'm 18. I have lived with my boyfriend for about a year now. It was really scary finding out I was pregnant. He was finishing his first year in college, and I was finishing my senior year of high school. We both almost tried to forget about it—like it would go away. That's not what happens when you're pregnant. After a while of not talking about it, I assumed we were keeping it. I got excited and made lists of things we would need. I made the best of the situation. He still wouldn't talk to me. I was 17 at the time and found a free clinic that did ultrasounds, so we went. I wanted to see our baby. I have no idea why he went now. We found out I was 12 weeks, 6 days on July 1, 2014—the day before my 18th birthday. We saw our baby and heard the heartbeat; I thought things would be OK. More time went by, and it still wasn’t a topic of discussion. So I continue getting excited for the baby. I got the baby app to calculate days left on my phone—tracking each month. I started writing in a journal to give the baby when it got older, anything to get excited for him or her. But then I got sick. It lasted, so I went to the doctor, and then my boyfriend decided he was going to talk about it. He wanted his input on it. He told me we aren't having a baby and that he would want nothing to do with me. The only people who knew I was pregnant were my mom and sister, and two of my cousins. My boyfriend instantly had this change of attitude, and he wasn't fully there like he used to be. We have been together for many years now, so it's hard to watch someone you love change like this over something. He started making calls and—because at that point I was 18 weeks they—told us it would be about $2000 for the abortion, and we would have to pay up front. We couldn't do it. He finally found a place in Rhode Island, so we went. We got the ultrasound confirming it was a viable pregnancy. But not only that, I was 21 weeks and 1 day. That broke my heart. We made an appointment for Wednesday the 13th to get laminaria rods inserted. I was scared and horribly upset that I was doing this for him. I asked the lady if I could have copies of the ultrasound. So now I have pictures of him or her from the first one and close ups of their head and face. We got there on Wednesday, and I had to take three Xanax to calm me down. Then they brought me into a room and had me lie down. They inserted four rods and told me to rest for the day. The following day, I returned for the same procedure and they inserted 11 more rods. There were moments where I almost said, "never mind." I didn't want it done; my boyfriend did. I wanted the baby. I went home and cried in my boyfriend’s arms in pain all night. Yesterday—Friday, August 15—I was brought in at 8am to get the procedure finished. I was brought into a room to lie and wait. They hooked me up to an IV and gave me pills to soften my uterus and start the labor. I watched and waited in pain as girls who had their procedures done, got wheeled into the room and left empty hearted. I waited four hours for my turn. They finally brought me to the operating room, and I asked if I would be able to bury the baby. The woman apologized and said, “no.” I begged for hand and footprints but again the woman turned it down. They slowly put me to sleep, and I woke up back in the room I was originally in. Alone. The woman gave me ibuprofen and ginger ale, told me the care instructions, and then I walked out to my boyfriend sitting in the waiting room. I don't know why I did what I did. The love in me for my boyfriend just told me that he would make it all better, that when I'm financially stable we would start a family. Something wise I should have listened to was, “no matter how old you are when you have a baby, it's gonna be just as scary having it at 37 as 17.” It is the biggest mistake of my life. It's only been a day, and just lying in bed with my boyfriend while he's sleeping, knowing we don't have to stress, still doesn't make it better. I now have been getting harassing texts from my mother and sister. They have posted about it all on Facebook. I've gotten a lot of grief over it, and only about two people have tried to help. If I had a choice, I would do everything differently. Your boyfriend isn't worth it. No matter how much he begs, if he really cares, he would be a man for his baby. Now at 18, I have to live with the biggest mistake of my life, and it's all my fault. I kept all the ultrasounds and my hospital bracelet, but I'm sure nothing compares to what it would be like to actually have my baby. I regret having too much love for him, because now that it's done, I don't know if I have any love left for him.