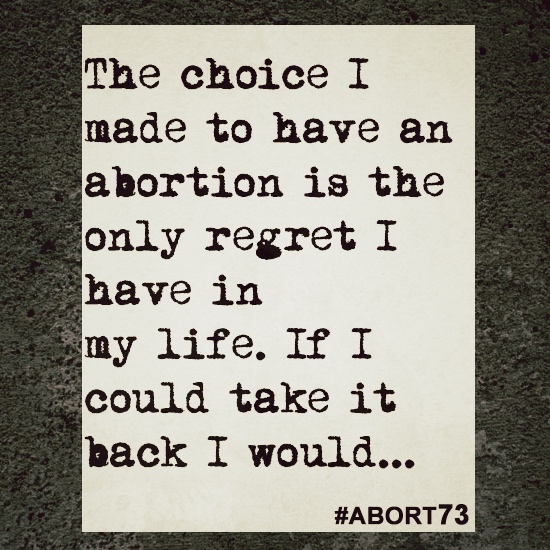 The choice I made to have an abortion is the only regret I have in my life. If I could take it back I would...

I was 22-years-old in June 2012 and in a long-distance relationship when I met [another man]. He was significantly older and he was absolutely smitten by me, as I was by him. My long-distance relationship had hit a rough patch, so I decided that "dating" wasn't a bad idea. I never had any intentions of sleeping with him, let alone not using protection if it ever came about. But never say never. We ended up sleeping together on more than one occasion, and in September of 2012 I found out I was pregnant. I knew for sure it was his, as did he, but he did not want anymore children because of his age and the fact that he already had 5 kids and 2 grandchildren. The first words out of his mouth were, "Let's fix it." I never felt so crushed in my life. Keeping it was never an option for him. I felt so alienated from my family because we had just experienced a close death, and I felt as if I would be burdening them with this. I had no one to turn to. The one person I should have been able to turn to was not entertaining the idea at all, so I reluctantly gave in and had an abortion a few days later. At the time, I justified my actions by saying I wasn't ready, and I was young. The father and I weren't in a relationship; I had a dead-end job and wasn't done with school, etc. In retrospect, the choice I made to have an abortion is the only regret I have in my life. If I could take it back I would.