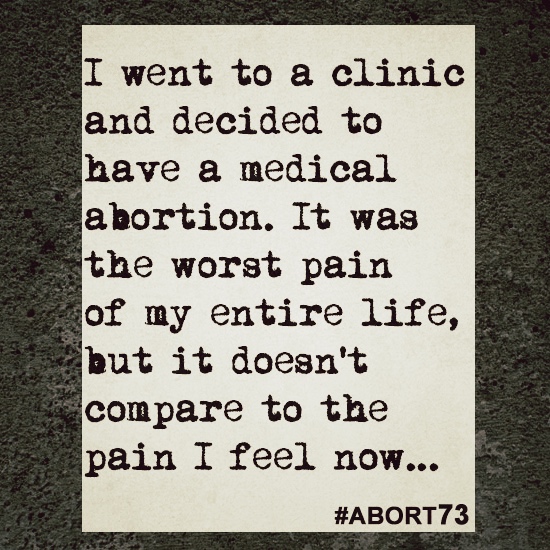 I went to a clinic and decided to have a medical abortion. It was the worst pain of my entire life...

I found out I was pregnant at four weeks and was told I had to come come back at seven weeks because the abortion pill wouldn't work otherwise. I lived with the knowledge that I was pregnant and couldn't do anything about it for three weeks. I had just started seeing someone but had hooked up with my ex a month before. After a family trip to Mexico, I noticed breast tenderness and missed my period. I went to a clinic and decided to have a medical abortion. It was the worst pain of my entire life, but it doesn't compare to the pain I feel now when I look at my stomach and know I should have had a baby. I still cry three years later. My daughter would have been born on December 13, 2011. The father said he wouldn't claim the child and pushed me for an abortion. I was scared and did what I thought I needed but now, I wish I had kept it. Then I'd have a 2 1/2 year-old-daughter to love. Please think twice… it will hurt more than just the physical pain that comes with the abortion. RIP Kennedy.