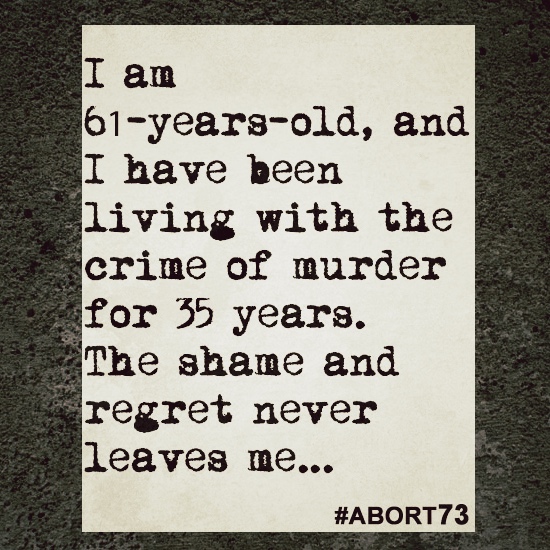 I am 61-years-old, and I have been living with the crime of murder for 35 years. The shame and regret never leaves me...

I am 61-years-old, and I have been living with the crime of murder for 35 years. The shame and regret never leaves me. In the year 1979, I thought I had so many good reasons for having an abortion. I was getting a divorce from the father of the two children I already had. I had fallen in love with another man as my marriage fell apart, and I wasn't positive who the father was. My new boyfriend was all too willing to pay for me to have an abortion. My soon-to-be ex-husband had made it plain to me he was going to fight for custody of the two children we already had together. I believed if he found out I was pregnant it would help him take my children away from me. So, I took the easy way out. The choice was made so easy. It was legal, it was paid for me—so my ex husband and other family would not know. Now every day during the month of June I wonder which day my baby would have been born on. What would he/she look like? I wonder about all the things a mother thinks of as she holds her newborn baby and as she watches her baby grow year after year. My child would have been 35 this year—with two older siblings, two younger siblings, and seven nieces and nephews. I wonder what it would be like for our family if he/she were here. I wonder if I would have a grandchild by this child and what this grandchild would be like. Too many question in my mind to list. Our society makes it easy for overwhelmed, scared, and often alone women to believe the better choice for their life is to abort an unwanted baby. I believe this choice is simply too much for us to carry. My faith in God’s forgiveness is the one thing that carries me through. Yet, I haven't fully forgiven myself. In the back of my mind, I'm always grieving and regretting I was ever given the choice to have an abortion. Maybe if it had not been made so easy I would have made the right choice. Maybe if I had made the right choice I could look at my family and feel like it is complete.  green guns black justly guns raglans guns thermals