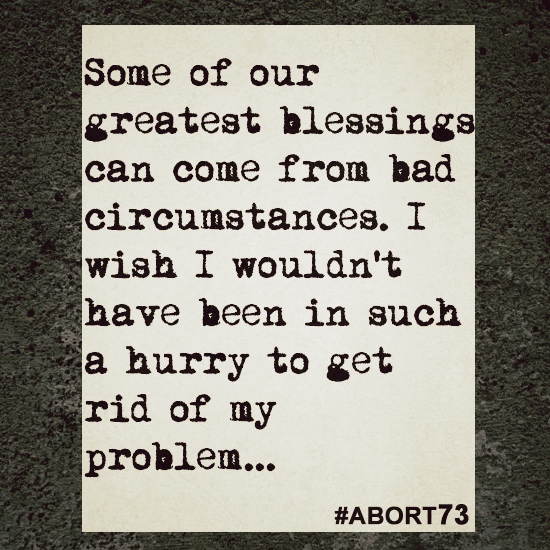 [Great] blessings can come (from) bad circumstances. I wish I wouldn't have been in such a hurry to get rid of my problem...

I was excited when I first found out I was pregnant. I was looking forward to having a third child. I had known [the father] since high school. One weekend we went to a pool party, and he accused me of flirting with someone else. We left the party, and we began to argue. He physically assaulted me in the car on a bridge while I was driving. The only way I was able to get him out of the car was to drive to the local police station. He then came to my house later that evening and cut the top on my car. After that, I decided I wanted nothing else to do with him or the pregnancy. So I immediately began to look up abortion clinics. I knew it was wrong but rationalized that I didn't want to be connected to someone who was clearly crazy and abusive. The people at the doctors office were pleasant, and the process wasn't bad. I just sat there praying to God for forgiveness. I told myself I would be OK with MY choice to not have this baby—even if that meant not having other children. Now, one week later, I regret the decision. God doesn't make mistakes, and when babies aren't meant to come here the mothers have natural miscarriages—not pill induced ones. I write this to say that some of our greatest blessings can come from what would be considered bad circumstances. I wish I wouldn't have been in such a hurry to get rid of my problem.