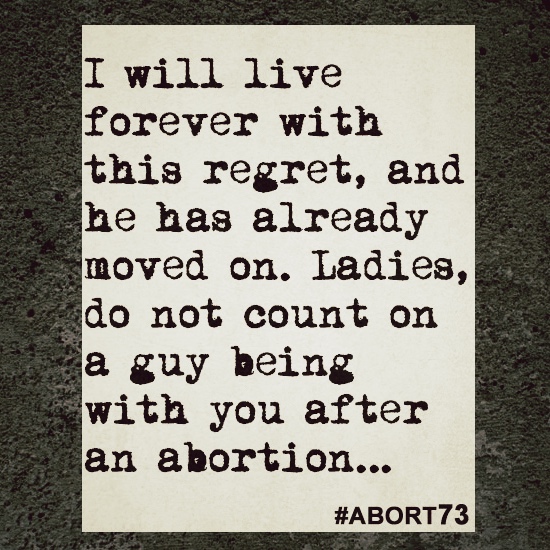 I will live forever with this regret... he has already moved on. Ladies, do not count on a guy being with you after an abortion...

My biggest fear at 36 is not being able to have a child. I told myself I’d keep the next one. Well, I got my wish, and I freaked out. My boyfriend of only two months already had three kids from two different baby mamas. He was a great guy and good looking. We would have a cute, multi-ethic child. I told him, and he wanted me to get an abortion. He didn’t want three baby mamas and had just gotten laid off. I got mad thinking about me. He had three kids; I had none. Someone was bound to be his 3rd baby mama. We both were not financially ready, and I didn’t want to rely on my parents. I felt he would leave me, but he made me think he would still be here for me. He kept telling me he'd help pay for the abortion and take me there. Lots of friends told me to keep it. But I knew I would be the one taking care of the baby. I was so stressed for 2 weeks. On the day of the abortion, he said he couldn’t get a babysitter. He told me to call him right after, and he'd come visit me. I felt OK with the abortion that day. Once I got the pill at the clinic, I was hesitant—but not hesitant enough. Later I called and texted my boyfriend with no answer. My boyfriend had lied, manipulated, and sweet-talked to me until he knew I got the abortion. I was furious, sad, regretful, and mad. How could I let this once sweet, respectful gentleman swindle and manipulate me? I couldn’t believe he would leave me on the day of the abortion. He was sighing in relief, and I was regretting this big time. I just killed my cute, lil baby. He never helped pay, which hurt as well. He just left me without a care. I was devastated. I wish I could reverse the pill. But it was done. Who knows when I’ll meet another guy I would want to have a child with? I will live forever with this regret, and he has already moved on. Ladies, do not count on a guy being with you after an abortion. It scares them into reality, and they go running fast. This is your decision that you will have to deal with. Abortion is a simple way out for some guys, but we are the ones who hurt from this. There is more joy and rewards from keeping a baby.