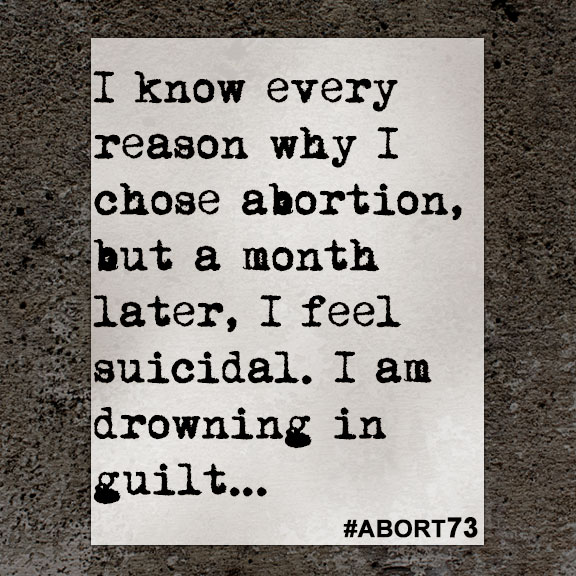 I know every reason why I chose abortion, but a month later, I feel suicidal. I am drowning in guilt ...

I am 17. One month ago, I had an abortion. My story is not tragic. No one made me get the abortion. It’s only my mother and me in the house. My father has never been in the picture. I broke the news to my mom, and she gave me every option and said whatever I chose, she would support me. I told my best friend—the father of the accidental child we created—and he was supportive of any decision I made. I immediately knew that I wanted to abort.

I am at the turning point of life where I will graduate from high school in the spring and go off to whatever prospective college I choose, and my mother and I are not financially able to support a baby. I have no idea how I will pay for college, let alone for a baby's education. My mother struggles to pay the rent every month. Although she swore she would support me and my baby while I went to college, I knew the idea was a fantasy. The baby’s father has been living on his own for years. His family abandoned him, and he struggles to support himself while going to the local community college. I knew that I did not want a baby and that I could not support one. Nor did I want the father and I to be strung together for life—raising a child.

I know every reason why I chose abortion, but a month later, I feel suicidal. I am drowning in guilt and don't feel as if i deserve happiness for what I have done. I feel selfish in not giving my baby life and selfish for not choosing adoption. I am struggling through the motions of life and feel as if all motivation is gone. I have started having self destructive behavior by experimenting with drugs and being quite promiscuous. I have a bright future ahead of me but am questioning if any of it is worth it. I have now began to analyze life's importance and see the cynical side to everything. I wanted to grow up to be a philanthropist and an environmental advocate, and now everything I once believed in seems to be a moot point because realistically, we all live in a world that is run by a green piece of paper that we gave ultimate value.

We put that dollar before any logic or reason. Our economy is booming from fracking and pipelines that will destroy our mother earth. But we don’t care so long as they create jobs. I am forced to start my life drowning in college debt because that’s the only way to get a good job in society. I live in a world where a naturally-occurring plant will give an average "criminal" thirty years in jail. In this same world, we can suck out our babies that have no way of defending themselves and can buy a pack of carcinogen cancer sticks known as cigarettes, and can go virtually anywhere to drown myself in alcohol that produces more bad decisions and organ failure than marijuana ever has. Everything I once saw as black and white is now ambiguous. Whats’ so wrong with dying young—considering everyone will die regardless—and the alternative to a youthful death is a full life of struggle and pain with nothing to show for all my hard work—just as my mother has done? I'm lost and totally alone—barely hanging on.