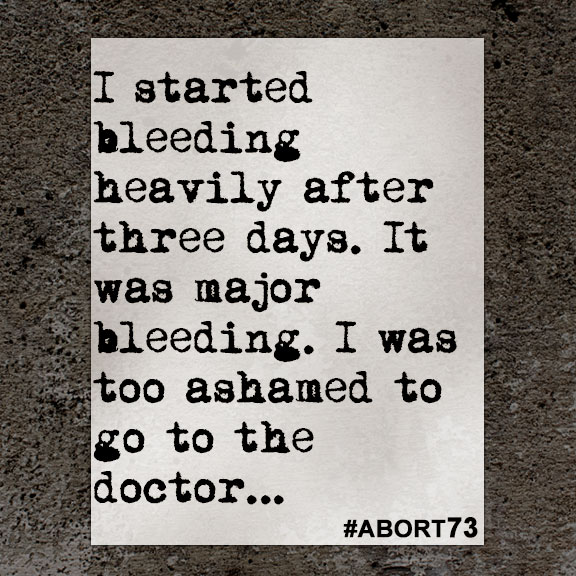 I started bleeding heavily after three days. It was major bleeding. I was too ashamed to go to the doctor...

My story is a bit graphic, but I feel like it's important to tell. I had been in a lengthy relationship of which I have a daughter who is four. I was in a downward spiral when my “Romeo” came along: built, tall, tanned, and extremely handsome. He had his eyes on me. I, for the first time, went out on my guy (after 12 years) and after only a few hook ups, I was late. I had been absolutely reckless with this man! I actually wanted him to get me pregnant because I wanted to ditch my current relationship so bad. What a ringer, and I was really into him. A sergeant in the army. Best looking man I had EVER laid my eyes on.

About six weeks in, I became violently ill. I'm already underweight and I was dropping pounds to no end. Hyperemesis. I thought I could get through it. I still lived with my original guy and never breathed a word of the pregnancy. I stopped talking to my side guy; the thought of him was becoming unbearable. I hardly knew him! The more I spoke with him, the more mental issues I discovered. It was endless. Scared is an understatement. I could taste him inside of me, and it made me puke even more. I hated him, and he didn't really know why I was ignoring him. I always preached pro-life. What a nightmare! I was all alone and nobody knew.

I drove out of town for my sister’s baby shower. Her baby shower didn't budge me; I still didn't want it. When I got back to town, I called and scheduled my appointment at Feminist Women's in Atlanta. It was quite a drive. I let a random friend in on it; I needed a driver. I walked into the clinic, but there wasn't a seat available. I felt awkward being the only white woman in the entire building. I was mind blown at how many black women were having abortions. The protestors let me have it! I wasn't showing because, like I said, I am very small framed. I had guessed I was almost 12 weeks. Most of these ladies had multiple children, and it was kinda obvious why they were there. So I questioned my morality at that point. I could afford this baby, but I didn't want it. I was sick at the very thought of it.

I was filling out my paperwork when I came across my ultrasound sheet. "Would you like to view the ultrasound or hear the heartbeat?” No, thank you! They called me back to the ultrasound room. I began questioning myself even harder. I had my legs; I could run until I was absolutely sure. Somehow, I made myself sit! I went to the ultrasound room and a quick two second bop to the tummy was all I got. I felt stressed. I told the ultrasound tech, "if the baby is over ten weeks, please tell me.” I knew it was moving around at nine or ten weeks. She replied, "no, you aren't quite close to that!" I felt a little relief, but I knew she couldn't have measured the crown to rump ratio that quickly! Off I went, back into the sea of women. I wouldn't talk to my friend. I just sat there in deep thought.

Next was the counselor and my nerves were wearing on me. I finally asked the woman, "what's my baby's gestational age?" She replied, "your products of conception are 8 weeks 3 days.” "Yeah right,” I thought. I got dressed into my gown, hair cap, footies and laid there. I held up my phone and then I took a picture of my tummy, since I hadn't gotten one of my baby. I had stopped eating at midnight the night before and it was nearing seven I clock in the evening. I began complaining. I was so nervous and really feeling guilty. I ran out and cried for comfort. The nurse was very rude to me. No sympathy at all. These other girls were like cattle! Not even a [sign of emotion]! Maybe I was scared because I knew the full extent of what I was doing and for whatever reason, my legs did not carry me out.

Finally, I was called back. The room was cold. I could see the tools; I knew what each piece did. As the anesthesiologist walked to my IV, my pulse was a staggering 168 bpm. I couldn't imagine what the baby's would've been. :(. Crying and scared, I wanted to stop. I considered letting them keep the money and just leaving! I just kept talking about how wrong it was. "Legs in the stirrups, please.” That's all I got. So I put them in there. As I watched the anesthesia go in and it hit my body, I said, "I'm a bad person.” Then, "ouch, that burnnnns........". Then I awoke in the other room. I was high. Nausea was immediately gone. They stood the girl up in the bed next to me and blood just pooled around her feet. It was too much. I went from laughing to crying. The nurse helped me to get dressed. I wasn't bleeding at all. I actually felt great compared to how I felt when I was still pregnant. The nurse marched them out one by one telling them "everything went great.” She gave them a bottle of doxycycline and shipped them out. When I went to her table, she didn't mention that everything went as planned. She just gave me a script and sent me out.

I just wanted to be out of there. I cried on the drive back. I fell asleep after I popped two Xanax. I hadn't popped one pill during my pregnancy and I always shielded my tummy to protect it, even though I knew I didn't want it. My maternal instincts were there, but my mind had played a sick trick on me. So I started bleeding heavily after three days. It was major bleeding. I was too ashamed to go to the doctor. I had clots bigger than my hands. I knew something was wrong. I still wasn't admitting to an abortion. After about four weeks past, and the bleeding was still quite heavy, I bought a pregnancy test which tested positive. I looked it up on the internet; it said that was normal. Some people have positive tests for six weeks. I had not scheduled a follow up with my doctor, so I figured I had better do that despite my shame, pain and guilt. I had to wait four more days.

The next day, I was hurting. I had no Midol left so I ran to Walmart. I bumped into a friend of mine who said, "geez, are you okay? You look white as a ghost!" I just redirected myself around him and went straight to the painkillers. I began having contractions. I immediately related them with my daughter’s birth. My uterus was contracting, and I needed to get home immediately! So I got home and ran for the toilet, and I felt a mass fall out of me and hit the water. It was disturbing. I knew whatever it was, I couldn't flush it because first of all, it wouldn't flush and secondly, I had to know what it was. I got it out. I was horrified. To my absolute horror, it was my little baby and it was FULLY intact. I could see fingers, I could see elbows, I could see everything :(. I was all alone in the bathroom crying and nobody knew why.

As horrifying as this is, I took a picture of the baby. Let me tell you, those pro-lifers don't lie. My supposed 8 week, 3 day fetus had it all. I wanted to bury it, but I was so afraid I'd get caught. I just disposed of it in the heat of my fear. The final resting place is awful, but what's truly dreadful is that I love one child more than my own life, yet I killed my other. Baby would've been born in June 2013. I told the child's father. He thinks I lied. He's a disgusting person too, worse than me. He wasn't phased by it at all. He told me his ex-girlfriend had at least seven abortions, and it didn't phase either one of them. I went from hating the guy to feeling massive regret. In my sick mind, I wanted him to get me pregnant again, and I swore I would keep it this time. He treated me as absolute trash! I ended up being so clingy and begging for his attention. In the end, he was absolutely disgusted by me. My oh my how the worm can turn. Now I'm absolutely broken, almost one year later :(. I don't know how I will feel a year from now, but I know that a week after the abortion, I found myself on imnotsorry.net. A year later, I'm very sorry. I feel like seeing and holding my dead baby was indeed my karma.