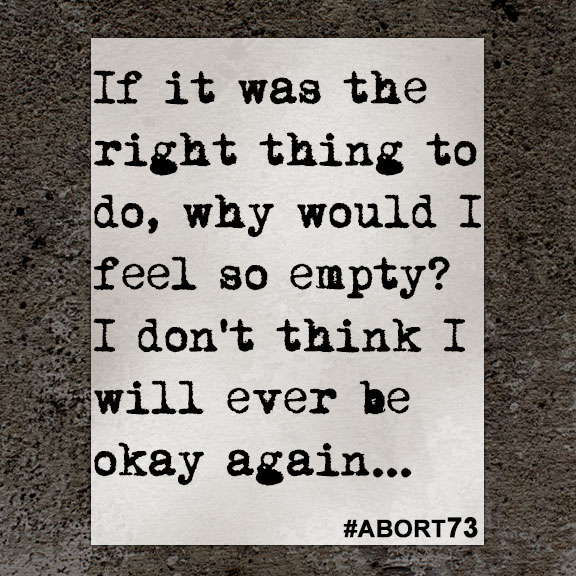 If it was the right thing to do, why would I feel so empty? I don't think I will ever be okay again...

I'm 19 years old and I had an abortion a little over two weeks ago. I've been dating my boyfriend for five months and am a freshman in college. My mother is probably the most conservative Christian woman in the world, and I used to think I was too. I was always against abortion. I never thought I would ever do something like that until it happened. At first, I was in shock (about the pregnancy), but I never even considered abortion. My boyfriend was supportive, said he wanted me to keep it, but also said that he will be there for me either way. Unfairly, I wanted him to TELL me to keep it. I wanted him to feel more strongly about his decision. I wanted to keep it, but I started to think about how I have literally no money, and my family doesn't either, and the stress I would put on my single mother who has been through enough. I was so afraid and alone and couldn't tell anyone, and I decided to call Planned Parenthood and schedule an appointment, just in case.

I thought I'd just change my mind and not even show up. I was told they only do abortions on Thursday, and the next Thursday would be Valentine's day. I ended up being so confused and rushed and afraid that I went into that clinic on Valentine's day—how ironic. I didn't want to wait another week and have my baby grow even more and then decide not to keep it so I rushed into a choice. The wrong choice. My boyfriend and I missed classes that day and walked about a mile there.

It was sunny every day that month until the day of my abortion. It was so gloomy outside. Right before reaching Planned Parenthood, we passed a church, and the sign on the church said, "Every child has a place in God's plan." I began to cry because I knew in my heart that that was a sign. I knew I was making the wrong choice, but I was so afraid and thought this option would have the least consequences for the people I loved. I figured I'd be the only one to suffer the guilt and regret, while my family and boyfriend could go on with their lives without me ruining it with my immature selfish decision to have sex before marriage.

When I walked into the clinic and signed in, it began to rain heavily. Another sign, we both whispered to each other. My boyfriend and I sat in our chairs studying all of the other girls in there who were also getting abortions. I saw a young girl there with her mother and felt so sorry for her because I could tell it wasn't her choice to kill her child, it was her mother's. And I thought about how my mother, if she knew, would NEVER even consider doing this to me or my baby. When they called my name for the ultrasound I was so nervous. She asked me if I wanted to hear about alternative options to abortion, but when I told her "yes,"she just handed me a pamphlet and continued telling me about how the abortion would go. I was five weeks, six days pregnant and decided to take the abortion pill. If that wasn't an option, I would definitely have never even considered not keeping my baby because the surgical abortion somehow seemed so much worse to me. Either way, it's still taking an innocent life.

When I finally went into the office with the doctor, she said flatly, "if you're sure you want to do this, go ahead and take this pill now" and then gave me further instructions for the four other pills I'd have to take at home the following day. I took it and tried not to think too much into it. The whole day it just felt so surreal. I turned my feelings off for it and I wish I would've LET myself consider the right thing and listened to my heart.

I felt no different, except less nausea the next morning. When it came time to take the four pills that would empty my uterus. I was SO nervous. I took the recommended pain killers and anti-nausea pills, waited 30 minutes and then put those four little pills in my cheeks. It was 5:00. My boyfriend was there with me and neither of us had any idea what was coming next. The pills started to dissolve and I ran to the bathroom and vomited violently for about ten minutes. I locked my boyfriend out of the bathroom and jumped in the shower, I put my hand down there and felt myself start to bleed. After about 3 minutes in the shower I began to feel dizzy and I called out for my boyfriend.

When he walked into the bathroom, I told him I needed to go to a hospital, and he called the emergency hotline number they gave us. While he was on the phone, I saw a bright light, my hearing went completely out, and I passed out on the floor. After a couple minutes I awoke, and my hearing returned. My boyfriend told me they said the on-call wasn't answering but that they'd call back in 30 minutes. They never did, so we called again and were told it's normal and that I'll be okay. I ran into the bedroom and put my heating pad on. It didn't help at all. I was having VIOLENT contractions and the pain medicine did not help whatsoever. For 5-6 hours I laid in bed, dizzy, moaning and screaming in pain while I contracted and bled profusely. Finally, at around midnight I took another nausea pill and another Tylenol and ate some spaghetti and felt a little better but still felt the contractions. I tried to watch a movie but ended up falling asleep.

The next morning, the pain was gone for the most part, but I felt like a different person completely. I felt emotionless. Empty. I couldn't cry, I couldn't talk. I thought I was going to die that night. And I sort of wished that I had. My boyfriend cries about it all the time now, and so do I. I constantly read other people's stories about their regret and it makes me feel less alone. I would be seven weeks and two days today. All I can think about is my baby. What it would have looked like, how I wish I had a big belly with a happy, lively little kicking baby inside of it. I never even wanted kids and now I feel so much like I need to have one, to replace the loss of my first child. I am only 19, and I know that this is going to affect me for the rest of my life. I feel like it ruined me.

Someday, when I have a baby, how can I be happy? How can I be the best parent I can be knowing this was supposed to be my second child—knowing I took the life away from their older brother/sister? I was supposed to love and protect my baby, and I took it's chance to live away. The most innocent thing in the world, who deserves to live more than anyone else, dies because its own mother decided "it was best." How could that be best? If it was the right thing to do, why would I feel so empty? I don't think I will ever be okay again. This has totally changed who I am. If anyone is reading this who is considering abortion, let me tell you. It is never too late to change your mind. No matter what you are worried about, money, parents, your goals, YOU CAN DO IT. Pregnancy doesn't mean your life is over, it just means you're taking a different course. God gave you a blessing, appreciate it. The love you will feel for your child once you hold it on your arms will make you happier than anything else you think you'll be "missing out on" by keeping it. If you weren't supposed to have it, God would not have given you something you couldn't handle. Abortion doesn't just destroy your baby, it destroys you. It breaks your spirit, it changes you, and you're better off having an unplanned baby than killing it. The damage will be much greater. I promise.