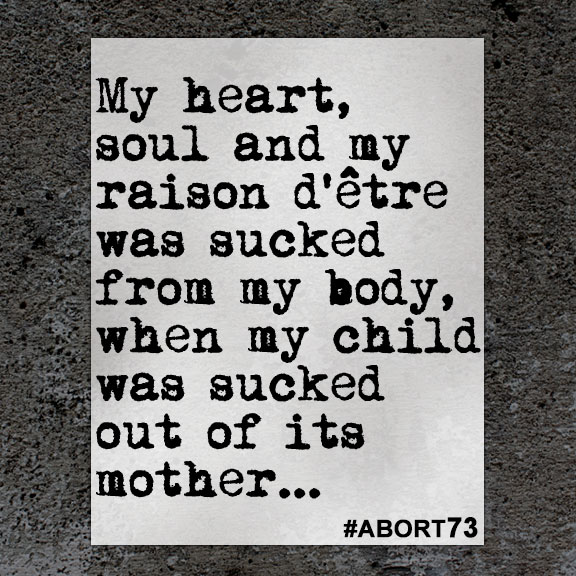 My heart, soul and my raison d'être was sucked from my body, when my child was sucked out of its mother...

My soul has been sucked out with my child!… We went away [for a] weekend and just as a precaution, I bought 2 pregnancy tests... We did the test and the second line made an appearance. I couldn’t believe what was happening and it was all just too surreal. She on the other hand freaked out and went totally ballistic... Having gone through an abortion in late high school, [I] made myself a promise that I would never go through an abortion again. She was very conflicted and leaned more towards the abortion than keeping the child. By the Sunday on our way back home, I broke down into tears (which I hadn’t done in 14 years) and begged her to keep my child and give the child to me. I will the raise the child alone and she could have nothing to do with the child – just don’t kill my child. She got me calm and promised that she wouldn’t abort my child. The five days that followed were the worst ever… [On] Wednesday, we were finally going to keep the baby and we started making plans. By Friday, she was freaking out again… I could see that this was spiraling out of control and that she was heading towards the abortion again, and I suggested that we get married… I would take the child if marrying me was not an option, and I would raise the child, and she would have nothing to do with the child. She was freaking out completely about her job and her family finding out and that we weren’t stable at that stage. I felt helpless… On Thursday, the 3rd of November 2011 at 18h00 I got an sms, not from her: “Hallo, it has been done. Regards”. A part of me died on the 3rd of November 2011 at 18h00, and I told her previously that if she goes through with this she will be killing me as well. Now I am sitting here and nothing makes sense anymore, I can’t sleep and when I do sleep I have the most horrific nightmares. I am scared to sleep because I might have a nightmare again and the thought of the abortion is constantly on my mind. It has only been five days, but I can’t believe that this has happened and everything seems bleak and colourless. She said she never had a choice but I strongly disagree. We are human and always have a choice… I was ready to face the ‘mess’ I made and did not want to take the easy way out and suggested a myriad of solutions, and actually begged her in tears to keep my child. She took the ‘easy’ way out and wasn’t ready to face the trouble she made. I have no rights to my unborn child, even though I bought two books on what to expect when you’re expecting and buying her all the vitamins and folic acid. I have no say. If she wants an abortion, she can get it without my consent, and if she wants to keep the child, I have no say to get an abortion but will be liable for maintenance if the child is born. What she has done makes me ashamed of calling her my ex, and I really did deeply love her more than anyone before. Why should the innocent, my child, have to pay for the mistakes we (her and I) have made when we had a choice and my child was never presented with that choice? I am sorry but it is not right that we as humans are allowed to take the easy way out and kill the innocent... Someone else cannot pay for your mistakes; the right thing to do is to fix the mistake by not taking the easy way out and killing innocent babies. My child was only 7 weeks old but still it was my child that was taken from me without having the power to do anything. Laws are supposed to be there for our protection (no matter how old or young, rich or poor). I am sorry, but the laws have failed and dismally so. In this day and age, when human rights are at the forefront after the atrocities of World War 2, apartheid and the genocide in Africa, a woman has the mere choice, without the fear of punishment, to participate in infanticide. I am sorry: why is what Hitler did so atrocious if mere choice can give a woman the right to kill? If a person kills one innocent person today, he will go to jail and serve a sentence but if a woman decides to kill her child, and not only hers, the fathers as well, she can go home and sleep snugly in her own bed tonight. My heart, soul and my raison d'être was sucked from my body, when my child was sucked out of its mother, and there was nothing I could do.