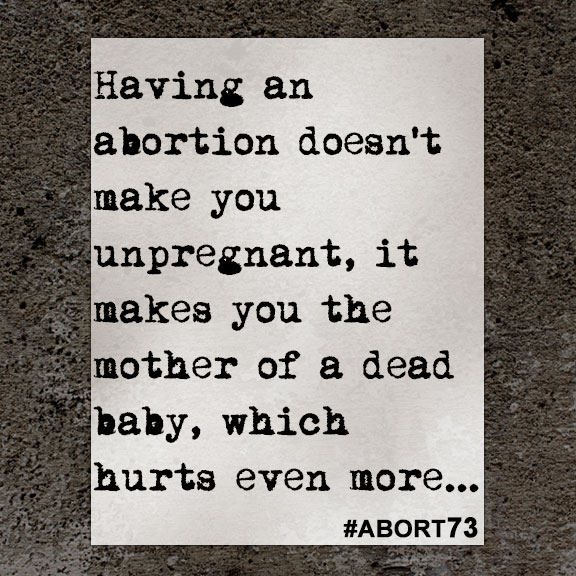 Having an abortion doesn't make you unpregnant, it makes you the mother of a dead baby, which hurts even more...

My life was perfect. I was a very happy 16-year-old girl who didn't let anything or anyone bring her down. I had an awesome friendship with my parents and had the "perfect" relationship with my boyfriend, who I had been with for over a year. Everything happened so fast. On May 6, 2011, I lost my virginity to my boyfriend and didn't use protection because he was going to "pull out." Little did I know this wrong decision was going to lead into the horrible situation I put myself through.

About three weeks passed, but it still wasn't my time of the month so there was no way to be sure I was pregnant. I started off with a sore throat; I thought I was just getting sick. Then I caught myself going to the bathroom more than usual. My breasts started hurting, and I thought it was because I was about to get my period. About four days passed by and nothing. That's when my boyfriend and I decided to get a home pregnancy test. I took my first test and I couldn't believe my eyes. I was pregnant but in denial. After five positive pregnancy tests, I finally convinced myself I was pregnant.

My boyfriend and I were very excited at first. We thought it was so cute that we were going to have a baby. It was around June 10 when we decided to tell our parents. They were really hurt and didn't think it was right for us to keep the baby. That's when it started to hit us. We were both 16 and expecting. Our family wasn't supportive at all. They thought we were making the wrong decision but agreed to respect our choice, though they clearly stated that they were not going to help us at all. They wanted us to move out alone and raise our child on our own. My boyfriend's mother had cancer and was dying, so his father never told her. He thought she'd get worse if she knew what we were putting ourselves through. We were both 16 and now had no support at all. We were literally on our own.

On June 25, we decided abortion was best, or at least we thought it was. I was lied to by the doctors. They told me it wasn't a baby, just a small drop of blood. On June 28, I entered the abortion clinic with my best friend, boyfriend, and my mom. I still remember that day and don't think I'll ever forget it. I remember seeing my baby on the ultrasound. I remember that little voice in my head telling me to run out of there. I didn't listen to it. I ignored it. Then the doctor started to do his job. Since I was crying so much, the anesthesia didn't make me go to sleep. I felt weak and couldn't feel anything, but my eyes were wide open. I remember the doctor inserting a scissor looking thing. I remember when he took out a little arm with a hand and all five fingers. There I asked myself, "wasn't it a tiny drop of blood?" Maybe it wasn't completely formed I told myself over and over again. Then he took out the legs and before I knew it, he had a whole, complete, destroyed body of a baby on top of a tray. Then and there it hit me—the awful feeling of regret. I felt my heart drop and tears run down my cheeks, but there was nothing I could do anymore. My mistake was already made.

The nurse took me into a room with two other girls who had also had an abortion and were laying in beds. I was crying non stop and she told me, "Don't worry, this is just a chapter in your book, you just have to turn the page and what your feeling now will go away." "You'll get over it," she told me many times. Again I was lied to. Six months have now passed by and there's not a day that goes by that I don't miss my baby. I miss feeling it early in the mornings and knowing I was never alone. My boyfriend and I have been on and off ever since. We both live with so much guilt and regret, but he will never understand me because I was the mother, the one supposed to protect it all the time and save it from harm, but I let them harm my baby. Having an abortion doesn't make you unpregnant, it makes you the mother of a dead baby, which hurts even more. I'm not the same person I was. There's not a day that passes by that I don't cry and look back and forth at my ultrasounds. If only I could go back in time. I wish I was able to hold my baby and tell it how much I love him/her.

I miss smiling. I miss being happy. I miss my baby so much. I just hope that he/she forgives me, and every night I tell her/him how sorry I am. I know my baby forgives me because he/she knows how really sorry I am and how much pain I'm going through. I'll never forgive myself and my baby will always be in my memories and heart. No matter what or how much time passes by, he/she will always be my first child. If you are planing on an abortion, DON'T DO IT! Don't let them lie to you. You are taking away a life and it's not a drop of blood. It's a tiny human, with all its organs. You'll never get over it. You'll always live with it, and you'll live with so much regret, without being able to do anything.