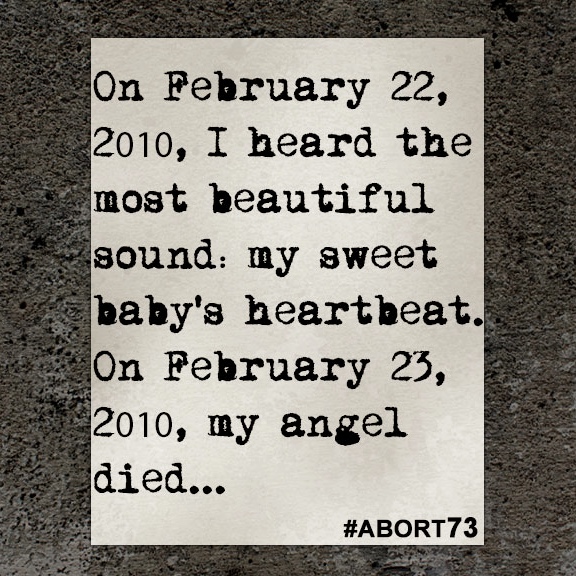 On December 25, 2009, I conceived our third child. I was happy naturally. Another child to love, to hold, to bring more joy into our lives. My gift. But my third child never had a chance. I allowed a man, my very own husband, to wear me down. I was threatened, ignored and brought to my knees in agony and despair. I let the hate and anger from my husband lead me to the place no woman should ever go. On February 22, 2010, I heard the most beautiful sound: my sweet baby’s heartbeat. On February 23, 2010, my angel died.

I was led into a room with many other women. Most were chatting like old friends. All of them were failed abortions after taking the pill. I told the abortion workers that I changed my mind. That these girls took the pill and it didn't expel the child. They told me, "No problem, lets have it suctioned out." They told me there was no pain except mild menstrual cramps. They said this will be quick and the recovery time is maybe three days.

NO! It was horrible. I felt everything. The doctor stuck a needle into my cervix to numb it. That's when I screamed, "NO!" I changed my mind. They said it was too late, they had begun and would continue. I later found out that what he did was illegal, and yes I could have walked right out if only I wasn't held down. I'm too ashamed to do anything about it.

I could hear him suctioning out my child. I screamed and screamed! I begged for my husband, but they said no. They told me to quiet down, that I would scare the other patients. I tried to get off the table, but four people held me down. God help me but it was punishment for the life I took. Since then, I have suffered from PTSD. I still have nightmares. If only I had more support I would not have murdered my child.

In September 2010, I had a dream. It was one of confusion and horror. I dreamed I awoke and found myself in my bathroom. I was looking down as I sat upon a toilet. And inside I watched as a rush of blood poured from me.

On October 7, 2010, I had a positive pregnancy test. On October 12, another positive, this time at the doctor’s office. Blood work set this babe at two and one half weeks gestation. At the time, I wondered if this was god’s way of giving me a second chance. But second chances are sometimes punishment for those who throw an innocent life away. I knew in my heart something was wrong. I did not feel many of the normal aspects of this growing life. The abortion doctor ruined my cervix.

On October 25, 2010, while using the bathroom, pink tinged discharge began showing. Then brown with rice-shaped clots of various size. By October 27, I was spotting blood and passing the tissue caring for my baby. On November 3, I sat upon the toilet feeling the need to urinate. A gush of blood took its place. I removed myself to the floor and held out my hands and caught my precious child. Still warm from my body. Encased in his/her gestational sac, rested my angel. You would never hear my voice or feel my touch. Oh how I wanted to kiss your sweet face. How I wanted to watch you sleep. How so very much I wanted you.