This passage is often erroneously cited as a biblical justification for abortion. 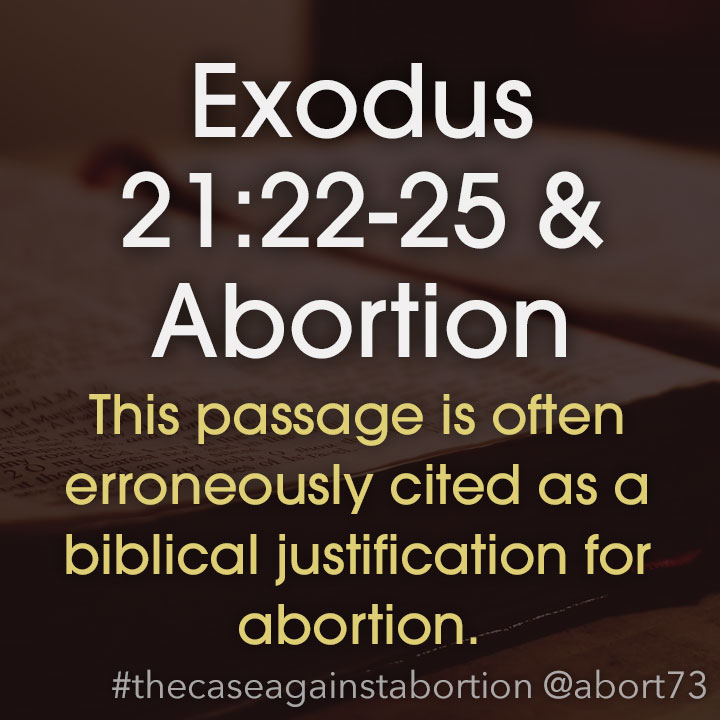 Whether Exodus 21:22-25 is talking about a miscarriage or a live, premature birth, it is impossible in either case to conclude from this passage that God is indifferent towards abortion.

Exodus 21:22-25 is a text that is often used in an attempt to biblically justify abortion. In most cases, those who use it as such do not actually belive in biblical authority. They're simply trying to "prove" to Christians that the Bible supports abortion. The passage in question reads as follows:

When men strive together and hit a pregnant woman, so that her children come out, but there is no harm, the one who hit her shall surely be fined, as the woman’s husband shall impose on him, and he shall pay as the judges determine. But if there is harm, then you shall pay life for life, eye for eye, tooth for tooth, hand for hand, foot for foot, burn for burn, wound for wound, stripe for stripe.1

On the surface, it may be hard to imagine how this text could possibly be used in the defense of abortion. It seems an almost conclusive prohibition against abortion. A pregnant woman is struck and she goes into labor prematurely. If no harm comes as a result of the early delivery, the accidental assailant is fined. If harm does result from the premature birth, the guilty man shall pay: wound for wound, life for life. This, however, is not the way everyone interprets the passage. Some believe that what is being spoken of is a miscarriage. If no harm comes to the mother as a result of the assault and miscarriage, a fine shall be issued. If harm does come to the mother, the punishment will be in accordance to her injuries. On this interpretation, abortion-advocates argue that since a monetary fine is all that is required for the miscarriage, the death of a child in the womb must be a relatively insignificant thing.

For the sake of argument, let’s assume that the miscarriage interpretation is the correct one. Does that mean we can use this passage as a biblical justification for abortion? Pastor Jack Hughes notes that there are four reasons why we cannot.2 First, this passage refers to an accidental injury. Abortion is intentionally fatal. Second, the fact that a penalty is required at all indicates that it was wrong for the baby to die. Third, the law of Moses does not generally require the death penalty for accidental death. Fourth, the fact that a lesser penalty is mandated for any harm that comes to the child is not a denial of the child's humanity or personhood. In the preceding verses, a lesser penalty is required of the master who accidentally kills his slave, who is without question a human person.

Having said all that, there is strong evidence that the miscarriage interpretation is not the correct one. The word Moses uses in verse 22 for “children come out” is the same word he used in Genesis 25:26 to describe a normal, live birth. Elsewhere in the Pentateuch, Moses does use the normal Hebrew word for miscarriage, as he does two chapters later in Exodus 23:26. Furthermore, the word Moses uses for “harm” does not indicate the child or the mother. It is left indefinite. If it was meant to apply exclusively to the mother, a feminine pronoun would have accompanied it. Moses uses the normal Hebrew word for “children” and the normal Hebrew word for “birth.” There is no reason to think this refers to a miscarriage. And to borrow Pastor Hughes’ conclusion: "The fact that this is the only place in all of the Bible where the death penalty is required for accidental death is significant. It shows us the value God places on both mothers and their unborn children. The death of either the mother or her child by accident would bring with it the death penalty!"3