Abort73.com > The Case Against Abortion > Biblical Teaching > Does the Bible Prescribe Abortion?

Does the Bible Prescribe Abortion?

An examination of the adultery test found in Numbers 5:11-31. 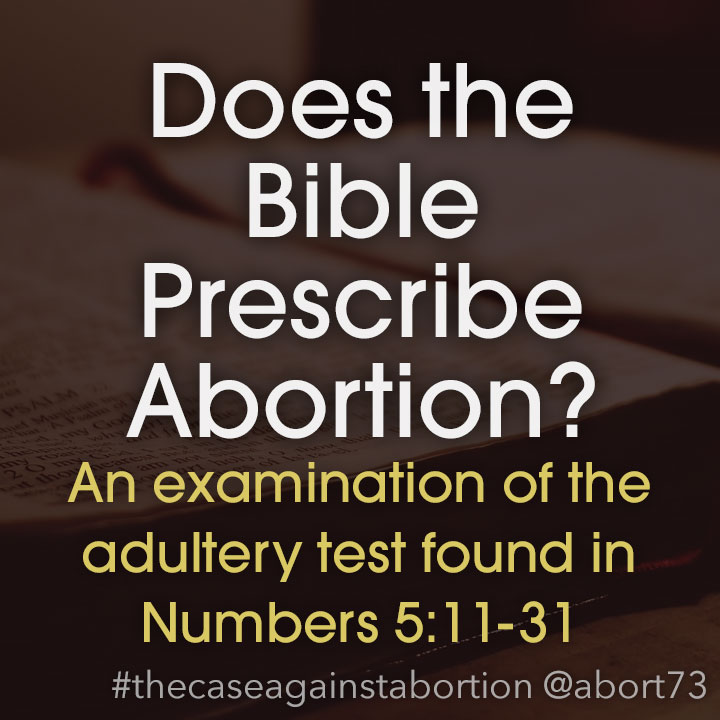 Some abortion proponents attempt to justify the practice by referencing Numbers 5:11-31, which they believe to be a priestly form of ancient abortion. Making such use of this passage ignores two critical realities.

In Numbers 5:11-31, Moses lays out an elaborate ritual for uncovering the secret sin of adultery. If a wife is suspected of adultery, she is brought before the priest, where holy water is mixed with dust from the tabernacle floor (vs 16) and ink from the priest’s written curse (vs 23). The woman must then swear an oath that if she has lain with another man, her body will be cursed upon drinking the water of bitterness. What is the bodily curse? In the ESV we read:

And when he has made her drink the water, then, if she has defiled herself and has broken faith with her husband, the water that brings the curse shall enter into her and cause bitter pain, and her womb shall swell, and her thigh shall fall away, and the woman shall become a curse among her people.1

The phrase, “her thigh shall fall away,” is an extremely perplexing one. One literal translation renders it this way: the “belly-of•her” is “turgid,” the “thigh–of•her...falls(-away).”2 Commentators have been wrestling with this one for a long time. The translators of the NIV have interpreted and rendered “her thigh shall fall away” as “her womb will miscarry.” As such, this wording has led some to argue that Numbers 5 offers a priestly formula for abortion. The first problem with this assumption is the same one that plagues those trying to make similar use of Exodus 21:22-25. Namely, the normal word for miscarriage is not used. The reason some translators have tied this strange turn of phrase to pregnancy is because of the declaration in verse 28. If the woman is innocent, the text states, she will be free of all guilt and able to have children. Clearly, one of the curses being prescribed to the adulterous woman is barrenness. Whether or not that includes the miscarriage of a child conceived through adultery is less certain.

What we can be sure of is that this passage in no way justifies abortion. If a miscarriage has taken place, it is because God decreed and executed it, not because the priest gave the adulterous woman an abortifacient. Dirty water does not end a pregnancy. The curse was not in the water itself, but in the judgment of God. If God determines that the penalty for adultery is the the loss of the resulting child, that is his prerogative and well within his authority. He did as much in claiming the life of David and Bathsheba’s first child. As it says in Revelation 1:18, God holds the keys of Death and Hades. We do not share that same authority—even when the circumstances of conception are suspect. The lineage of Christ was marred by nothing less than fornicators, adulterers, prostitutes, and rapists.3 While that doesn’t make such behavior any less wicked, it certainly indicates that children conceived out of sexual immorality are no less valuable. God is at work in every conception—even those that begin as a result of rape or adultery.