Abort73.com > The Case Against Abortion > Biblical Teaching > Conception & Pregnancy in the Bible

Conception & Pregnancy in the Bible

A look at the unique prominence the Bible affords to conception. 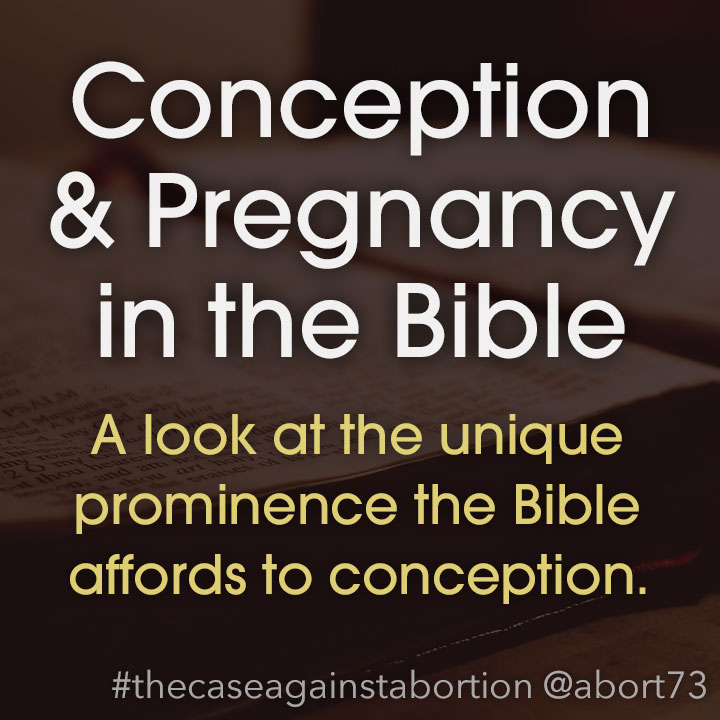 Starting in Genesis 4:1 and progressing throughout the Old Testament, there is a consistent pairing of conception and birth in Scripture’s family narratives. It is not unreasonable to conclude that God is giving special significance to both the sexual act of becoming pregnant and the decisive beginning of a new human life.

We've already looked at the words the Bible uses to describe unborn babies and the personal characteristics it ascribes to them. Simply put, anyone who has an interest in justifying abortion does not speak as the biblical authors do. That being said, there is still one potential objection that we must address. When John the Baptist leaped for joy in his mother’s womb, Elizabeth was at least six months into her pregnancy.1 If we assume that all of Scripture’s references to children in the womb refer to babies nearer birth than conception, how can we be certain what God’s view of unborn children is during the first trimester of pregnancy, when close to 90% of all abortions occur?2

At the crux of this objection is the idea that aborting early in pregnancy is morally superior to aborting late in pregnancy. Statistically speaking, 66% of the Americans surveyed in a 2003 Gallup poll believe abortion should be legal during the first trimester; only 10% believe abortion should be legal during the third trimester.3 One of the best ways to demonstrate the fallacy of making such distinctions is to examine the basic biology of prenatal development. From conception on, human development is a continuum. The only differences between children early in pregnancy and children late in pregnancy are the differences that don’t matter. More to the context at hand, there are a number of ways to respond to this objection from the pages of Scripture.

Of the texts we’ve looked at so far, many of them have just as much application to early pregnancy as they do to late pregnancy. When the angel commands Samson’s mother to not drink any wine for the sake of the Nazirite in her womb, it is not a prohibition that applies only to the second or third trimesters. It is given before conception. When David traces his personal history back to the womb, he takes it all the way back to conception: “in sin did my mother conceive me.”4 The bride of Solomon does the same thing when she references, “the chamber of her who conceived me.”5 And without question, all of the references to being formed in the womb are especially applicable to the first trimester, since virtually all of the “forming” takes place during the first eight weeks. It is also true that starting in Genesis 4:1 and progressing throughout the Old Testament, there is a consistent pairing of conception and birth in Scripture’s family narratives: “Now Adam knew Eve his wife, and she conceived and bore Cain... Cain knew his wife, and she conceived and bore Enoch... Sarah conceived and bore Abraham a son... Leah conceived and bore a son.”6 The list goes on and on and on. “Bilhah conceived and bore Jacob a son.”7 Wouldn’t it have been more efficient to simply say, “Bilhah bore Jacob a son”? Though we can’t say for certain why the biblical authors were so often compelled to preface birth accounts with conception (literally “becoming pregnant”) accounts, it is not unreasonable to conclude that God is giving special significance to both the sexual act of becoming pregnant and the decisive beginning of a new human life.

Depending on the translation you’re using, there are only 1-3 times that the word “conception” appears in the English Bible. Hosea 9:11 is the verse that is most consistently translated to include the word “conception.” It reads: “As for Ephraim, their glory shall fly away like a bird—No birth, no pregnancy, and no conception! (literally, “conception of biological life”8). This same word has been translated “conception” in Ruth 4:13: “So Boaz took Ruth and she became his wife; and when he went in to her, the Lord gave her conception (literally “conception to·her yahweh and·(he) gave to·her”9), and she bore a son.” There are two things to note. First, God is not only the one who forms children in the womb once the process has started, he is the one who divinely decrees that the process start in the first place. God gave her conception. Second, in declaring a curse upon Ephraim, Hosea starts with the blessing of birth and works backwards to conception. Notice that he doesn’t say, no conception, no implantation, no heartbeat, no brain wave activity, no viability outside the womb, etc. The only decisive moments are conception and birth—indicating again that there is no biblical line of demarcation in the womb, where we go from being a non-child to a child.

Finally, let’s consider Ecclesiastes 11:5: “As you do not know the way the spirit comes to the bones in the womb of a woman with child, so you do not know the work of God who makes everything.” We are ignorant of when and how God imparts a human soul to a developing body. We are also ignorant of how and when God removes that human soul from the body at the point of death. What we do know is that God merges spirit and body somewhere in the womb. Our inability to pinpoint the exact point at which this happens should not lead us to conclude that abortion is permissible. It should compel the very opposite. If there is uncertainty as to when the spirit of a human being enters the body of a human being, we must error on the side of protecting life, not on the side of destroying it.