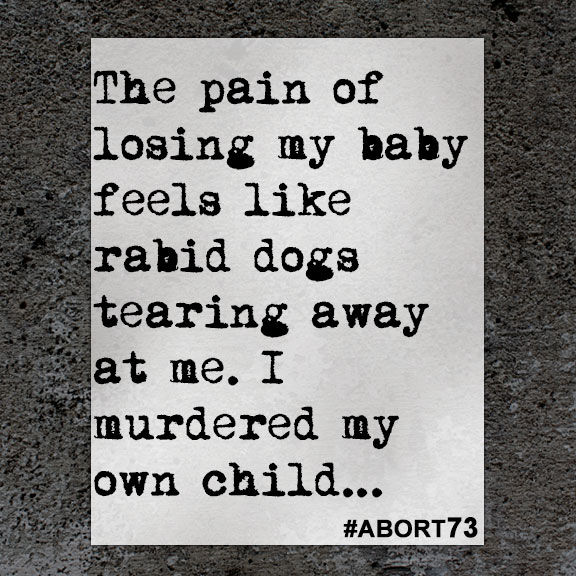 I was once happy. I had loving parents, friends who were always there for me, and a really cute and kind boyfriend who cared about me. My grades were excellent. I was seen as a responsible, hard-working person. My parents trusted me and were happy with everything I did. I am an only child. I set high standards for myself, so I would never show up as a disappointment to my ever so loving parents. I was in a good position. I was very happy. I wanted to stay on my happy little cloud of perfection, but eventually all clouds break up.

My boyfriend and I had been together for two years when he brought up the topic of sex. I was still a virgin, so I was a bit skeptical. I finally agreed with one condition; we had to use protection. It was actually kind of amazing. After a couple months, I became pregnant and my life crashed around me. I would have to leave school, and my grade point average would go down. My parents would no longer trust me when I was around my boyfriend. When I first found out, I didn’t even want to think about how my boyfriend would react. He had told me multiple times that he wanted to be married and settled down before he considered kids. I knew he loved me, but I was worried he wouldn’t love our child. And while I was perfectly fine giving birth and then maybe putting the child up for adoption, I didn’t know whether my parents or boyfriend would be OK with that.

It was an impossibly hard decision to tell my parents and boyfriend. I waited nearly a week before I got the guts to tell my parents. Their reaction was terrifying. My parents got so angry at me; they kicked me out of the house. I turned to my boyfriend. He was shocked and reminded me of when he wanted kids. He said he would support me and still loved me, but he couldn’t afford a baby, and I knew that I couldn’t either. Although I went to live with my boyfriend, he said I needed to get an abortion because we had no way to raise a baby in a happy home. I didn’t want to, but he insisted. At this point, I had practically no one left. Miserable and scared, I went to an abortion clinic. At the abortion clinic, they put me under anesthesia. I could feel them sucking the limbs of my baby away. As soon as I left, I knew that I was going to hell.

When I told my parents, they yelled at me, told me I was going to hell, and disowned me. I still have a home at my boyfriend’s house and his parent have agreed to let me stay with them. My parents didn’t like me pregnant but hated me when I got an abortion. I don’t know what I could’ve done to make them not hate me.

The pain of losing my baby feels like rabid dogs tearing away at me. I murdered my own child. Like knives stabbing at me. Every. Single. Day. I still haven’t been able to talk to my parents. I don’t know if I should apologize to them for getting pregnant and getting an abortion, or just be angry for my abandonment at their hands. I don’t know what I could do to make up for this heinous crime I’ve committed. And while all the “pro-abortion” people say that life begins at birth, it is a true and undisputed scientific fact that life begins at conception. The child was never mine, although I refer to it as mine. It was always God’s child. Abortion is the murder of an innocent human being. My want to not be pregnant did not outweigh the right for a child to live. I could’ve just gone the adoption route. I didn’t need to be a selfish person and kill my child. I can’t blame the pressure of my family and friends as the reason I killed my child. At the end of the day, it was my choice to do this. It was my decision to kill my child.